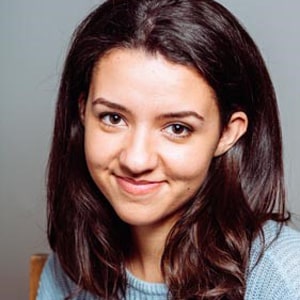 Maddy Kelly is a comedian based in Vancouver, BC.

As a standup, Maddy’s observational style and honesty in discussions around feminism and her mixed race heritage made her a favourite at clubs and venues across the country, as well as a two time guest on CBC’s The Debaters, and an episode of CTV’s The Standup Show with Jon Dore. At only 24, Maddy has honed an ability to relate to a younger audience, leading her to amass over 3.5 million views on clips of her stand-up on Tik Tok.

Maddy has also worked on numerous projects with Kelly&Kelly as a performer, writer and director including an upcoming podcast called Let’s Make a Sci-Fi and The Slowest Show, a conceptual comedy tv show available on CBC Gem. In 2020 her sitcom project Untitled Apartment Sitcom was optioned by UTA’s Clamor Network in Los Angeles.