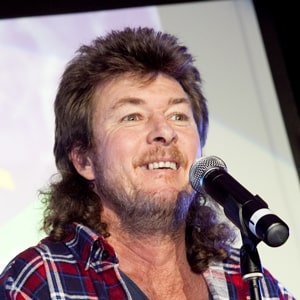 Chris is one of Australia’s premier comedy stars. He’s an Aussie bloke, a yobbo or a bogan, from his flannelette shirt to his double plugger thongs. His ‘Hoganesque’ style of comedy appeals to every average Australian and touches on the delicate issues of beer, sport and relationships – he’s also had a number 1 hit single entitled ‘Bloke’. Not bad for someone who can’t sing.

More recently, Chris has done five ‘TOURS OF DUTY’, travelling to The Solomon Island, East Timor, Iraq and twice to Afghanistan, to entertain the Aussie troops and help keep their spirits high. Chris has also performed around the world, in Scotland, Singapore, Hong Kong, New Zealand, New Guinea, The United Arab Emirates, Malaysia and America. Chris has headlined and Mc’d every major comedy club in Australia and quite a few around the world. He is regarded by his peers as one of the best in the business. He is equally at home addressing a four course corporate function, A country football club, or the front bar of your local pub.